Between September 2015 and January 2016, our colleague from the AGRARIA Department of the University of Reggio Calabria (Italy), Dr. Eng. Demetrio Zema stayed at our group to work in the project Characterization and modeling of the hydrological response of semi-arid watersheds in southern Spain: integrating geomorphological and hydrological responses” supported by the Seneca Foundation (Research Agency of the Region of Murcia) with a senior visiting scientist fellowship. He has been working on the hydrological modelling of the Upper Taibilla and Rogativa watersheds together with members of our group (Carolina Boix-Fayos and Joris de Vente). 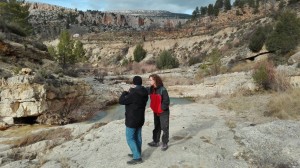 The cooperation between the Italian AGRARIA and the Spanish CEBAS group started in 2012, sharing experiences in the study of the hydrological and geomorphological response of Mediterranean watersheds, under different climatic, land use and management conditions. This collaboration already resulted in joint publications in the Journal of Soil and Water Conservation and Ecohydrology.

In the framework of this cooperation, and supported by an Erasmus+ fellowship, Maria Francesca Cataldo, an MSc student in forestry, also stayed at our group during the same period to undertake her MSc thesis entitled: “Analytical characterization and modelling of the hydrological response of semi-arid watersheds in southern Spain”. Francesca demonstrated to be a very efficient and promising student and the colaboration with Demetrio and Francesca has been very productive and satisfactory. Francesca will defend her Master thesis next 10th of March in Italy. 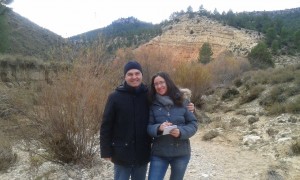